Today I read an article from Guitar Player, from 1980, where Geddy Lee solved a question I’ve had for years, about what kind of bass was featured in a number of pictures. 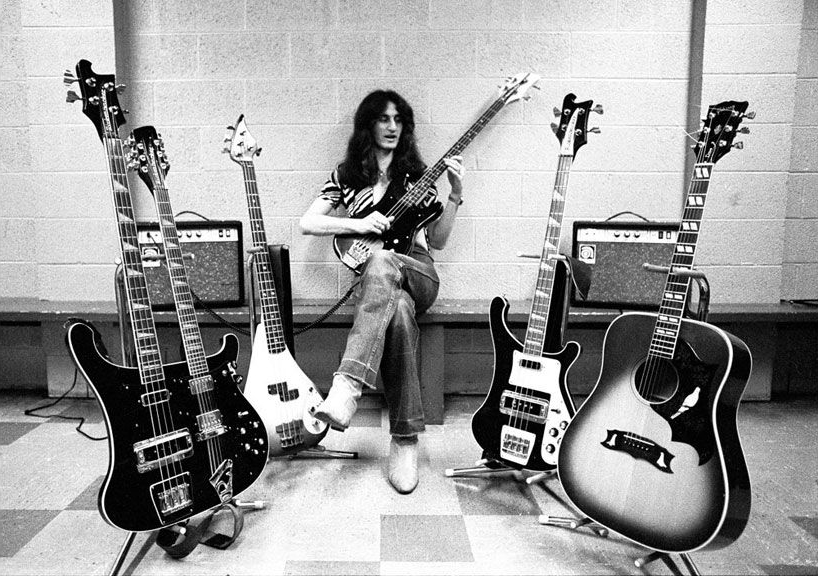 See the bass immediately to his right? It looks like a teardrop. I’ve seen color pictures; it’s sort of a light blue gradient; it’s actually a pretty bass, even if it looks funky.

It also looks even less comfortable to play than a Steinberger Spirit, but hey… what do I know? Maybe it’s an acquired taste, and maybe this teardrop-shaped thing led Geddy to the Steinberger around the Grace Under Pressure era…

Anyway, like I said, I’ve wondered what that bass was for a long, long, long time. And Guitar Player finally explained!

It’s a Fender Precision – Geddy’s old, old, old (pre-Rickenbacker) Precision bass, cut down and modified beyond recognition (apart from, I guess, the pickup configuration – but that’s not a sole identifier, since other basses have used the Precision pickup alignment as well.) Apparently, it underwent some surgery (I don’t know why offhand, nor do I recall hearing/reading) but apparently even in this picture it was effectively unplayable.

That’s a pity; one hates to hear of any instrument being damaged. (Modified, sure. Damaged… no.)

But at any rate, the question I’ve had for a really long time has been answered at last.

This site uses Akismet to reduce spam. Learn how your comment data is processed.

— Hillel
We use cookies to ensure that we give you the best experience on our website. If you continue to use this site we will assume that you are happy with it.Ok